In the summer of 2014, Nkei and I went to a Cuban & Brazilian percussion workshop with Bay Area drum legend John Santos and Ilê Aiyê musical director Mario Pam. One of the Cuban rhythms John taught was Mozambique, a dance style derived from traditional Cuban comparsa (parade/street festival) music and developed by Pello el Afrokan (Pedro Izquierdo) in the 1960s.

To me, all the Cuban rhythms we learned were fascinating, but Mozambique was one of the most fun. Like the more traditional rhythms, it featured several layers of syncopated bell, shaker and hand drum parts that interlocked in very precise ways. But in the case of Mozambique, the different parts added up to a swinging, dance-friendly whole.

I decided to bring John's arrangement of Mozambique to this class session, which is focused on technique, because I think it's great practice playing interlocking, highly syncopated parts; producing different tones on the same instrument; and feeling the deep pulse of the music (downbeats) even when no one is actually playing them. My intention is not for the class to produce an "authentic" or performance-ready version of this rhythm - this is complex music that people devote their lives to, and neither Nkei nor I is from the Cuban tradition or has studied it deeply enough to claim to reproduce it exactly.

There are several layers of "translation" between Pello el Afrokan's original and what we play in class - John Santos' arrangement, and my adaptation. The bell, shaker and bass drum parts are exactly as John wrote them down (*not* necessarily as they were always played in the 1960s, or now!). The snare/repinique parts are my adaptations of the conga parts John wrote. They are rhythmically identical to his, but use the tones available on a snare drum, which are different than a conga's.

Here are two clips of Pello el Afrokan's band playing the same song (one has better sound, and the other shows drummers & dancers), and my chart of the rhythm as we're playing it in class. Enjoy!
-Sarah 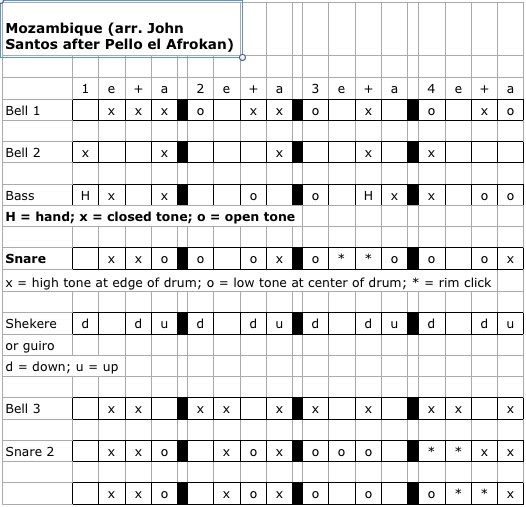 What is your Child's Favorite Song from Tyke Tunes?